While films are usually followed by stage adaptations, Last Cab To Darwin worked in reverse being a screen adaptation of the 2003 stage play ‘based upon the true story of taxi driver Max Bell who was diagnosed with terminal stomach cancer in the early 1990s.’ (https://en.wikipedia.org/wiki/Last_Cab_to_Darwin)

It will get people talking about voluntary euthanasia, but it also makes you think about who and what you value in life, and the decisions you make.  We have all been touched by someone battling cancer, and this film plays all the notes on your heartstrings.

Director Jeremy Sims and crew did a fantastic job with this film. It was quite the treat to have him and Michael Caton there for the Dendy Canberra red carpet premiere followed by Q&A.  I had a few questions to ask; I did get greedy and asked two on my turn – did they shoot on location at all the towns shown in the movie along the way from Broken Hill to Darwin, and will there be any chance of a spin off to show us more of Tilly’s story?

You had to laugh at Michael’s answer that they would first have to teach Mark Coles Smith, who plays Tilly, how to play football – hence why there weren’t actually any football scenes.  Ha, why not?  There’s a Wimbledon movie after all.  Tilly is quite the character.  He’ll get you thinking about the way you treat people, and your own decisions in life. 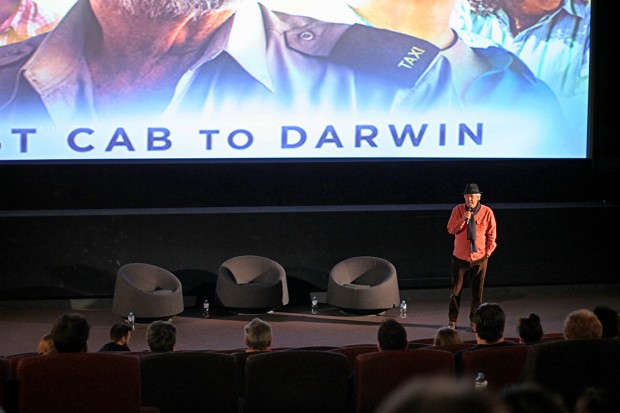 There are many Tillys out there that get caught up in the spiral, making a wrong decision and ending up in bad circumstances.  But the full of life Tilly will have you hoping he turns it around.  You’ll also love his Butcher Dance!

As for shooting on location, it seems there was resistance from high up, but I’m glad Jeremy persisted with shooting at each location as I believe the authenticity completes the movie.  It also took the crew on their own journey as they made their way up from Broken Hill to Darwin, and I am quite envious of them.  I love a good road trip, the landscapes and sunsets, and I have done inland trips many times between Rockhampton and Canberra/Melbourne/Adelaide.  Shooting this film would have been fun and quite the adventure to make the hard work worth it.

Up the middle of Australia may be a drive I’ll do one day, but for now the next best option for you and me is to watch this movie.  To the cast and crew of Last Cab To Darwin, thank you.